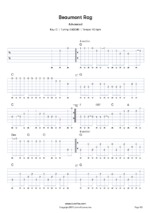 Beaumont Rag is a popular Texas swing and old-time turned bluegrass fiddle tune. It's known in bluegrass circles primarily as a flatpicking tune due to guitarist Doc Watson's popular recordings of it. The Rag is named after the town of Beaumont, Texas and was first recorded by fiddler Samuel Morgan Peacock in 1929. Bob Wills further popularized the tune in a western swing style. The flatpicking arrangement to Beaumont Rag has two parts and the second part features some flashy crosspicking over the V and I chords. It's become a standard in bluegrass circles and is a good test for those working on their more swingy improvisation chops.