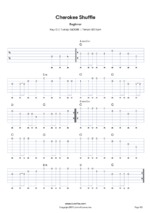 Banjo player Howard Bursen and many others have identified "Cherokee Shuffle" as a West Coast version of “Lost Indian” which could be traced back to fiddler Tommy Magness's recording of it in the 1930s. However, it was Tommy Jackson who later transformed the Magness’s Lost Indian into Cherokee shuffle. He added a distinctive second part and changed the key to "A." Many fiddlers took Tommy’s addition to the earlier version and infused it into Magness tune.

There are two main versions of Cherokee Shuffle in circulation and one of them has ‘A’ and ‘B’ part with the same length, while the other doesn’t.