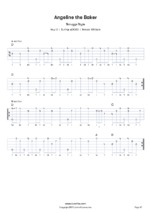 "Originally titled Angelina Baker, this Stephen Foster song was written and published in 1850 for the Christy Minstrels, who were a blackface group formed by Edwin Pearce Christy. It's since become a part of the old-time and bluegrass repertoire and is one of the most popular beginner songs to learn because of it's repetitive melody and simple form. The lyrics lament the loss of a salve woman who was sent away by her owner. John Lomax collected an instrumental version which was under the title "Angeline the Baker." This instrumental version helped popularize the tune in bluegrass circles.