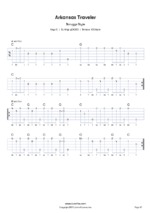 Composed in the 19th century by Colonel Sanford C. 'Sandy' Faulkner(1806–1874), "The Arkansas Traveler" reigned as the unofficial state song of Arkansas from 1949 to 1963. It became the official state song in 1947, when a committee came together to pen down the current official lyrics. The song is traditionally known to have had several versions of lyrics, which are much older than the copyrighted song. However it being a state song, the official lyrics were copyrighted and it can be found on the website of the Arkansas Secretary of State.

The melody is catchy and it's one that many are accustomed to hearing when growing up because of its popularity in children's music under the name "I've Got a Baby Bumblebee."

Oh, once upon a time in Arkansas
An old man sat in his little cabin door
And fiddled at a tune that he liked to hear
A jolly old tune that he played by ear
It was raining hard, but the fiddler didn't care
He sawed aways at the popular air
Though his rooftop leaked like a waterfall
That didn't seem to bother the old man at all

A traveler was riding by that day
And stopped to hear him a-fiddling away
The cabin was afloat and his feet were wet
But the old man still didn't seem to fret
So the stranger said Now, the way it seems to me
You'd better mend your roof said he
But the old man said as he played away
I couldn't mend it now, it's a rainy day