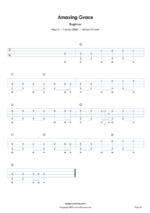 The hymn Amazing Grace is a Christian hymn published in 1779 by Anglican clergyman John Newton. The words came from a personal experience when he had a supernatural encounter that changed the course of his life.

Newton grew up with no religious conviction and had a life formed by many twist and turns. Newton was conscripted into the royal navy and after leaving the force he joined the Atlantic slave trade. However, the event that marked the change in the life of Newton came in 1748, when a violent storm battered his vessels off the coast of County Donegal, Ireland. The storm was so severe that for fear of losing his life and everything that he had built, Newton went on his knees and called out to God. That was the beginning of his spiritual journey and when he ended his seafaring in 1764, he immediately picked up an interest in Christian theology.

In 1764, he was ordained in the church of England and he became the curate of Olney, Buckenshire. There he began to write hymns alongside William Cowper, who was also a poet. Many might not know, but ‘Amazing Grace’ was inspired by a sermon on new year's day of 1773. There is no known fact that the music came with accompanying verse, but there is a possibility that the congregation merely chanted it. The hymn saw the publicity it deserved in 1779 when it was printed in Newton and Cowper's Olney Hymns. However, the obscurity surrounding hymns soon put it back in the dust, especially in England. Amazing grace is one hymn that carries the message of the gospel quite well and it describes the forgiveness and redemption of sins from the view of a merciful God that loves, no matter what. And so in the 19th century, the hymn was used extensively during the great awakening. There are about 20 melodies associated with it and the most popular of it all that is still widely used today is the tune used in 1835, which is called "new Britain." The hymn is now seen as an emblematic African American spiritual with influence in folk music.