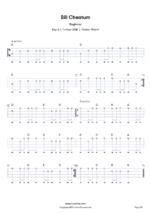 Bill Cheatum is known under many names, some include "Cheatum," "Cheat 'Em," "Old Bill Cheatum." This fiddle tune is common throughout the southern part of the country, which is where it found its origin. The name “Old Bill Cheatum”, was first heard in the Ozarks mountains and was compiled by musicologist/folklorist Vance Randolph. It was published in 1954 by Randolph. The earliest recording of the tune was done by Texas fiddler Eck Robertson in 1922 and it was part of his “Brilliancy Medley”. Other versions includes “Cheat Em” by the Allen brothers and "Fiddlin' Arthur Smith" from Tennessee did his own rendition in 1940. “Bill Cheatum” has no doubt experienced a long bout of popularity and bluegrass and old-time music and is a staple at fiddler's conventions and jam sessions.