This old time Appalachian folk song was originally written on the fiddle and is one of the first songs students of the 5-string banjo learn.

Nobody knows when this song was composed. Some people think that it is referred to the town in Colorado, but it may also be a reference to the small town of Cripple Creek in Wythe County, Virginia. This area was settled in the middle of the 17th century while the gold strike in Colorado began in 1891. The first recordings of this song appeared in the early 1900s. 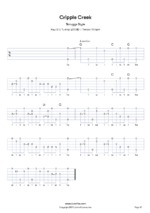 "Cripple Creek" is an Old-Time Appalachian folk song written on the fiddle but is widely known as a banjo tune due to Earl Scruggs's recording of it on his record, Foggy Mountain Banjo. Beginner banjo pickers typically start out with this tune because it includes many of the elements involved in combining right and left hands when playing the banjo.

Some say it originated in Cripple Creek, Virginia, while others say it is based on Cripple Creek, Colorado, during the gold rush. Those who argue that the Cripple Creek in the song is that of Virginia believe so because the year 1654 and mid-1700's witnessed the exploration of the area. The area came to house farmers as the land was fertile and a settlement was built at Fort Chiswell. There were also natural resources in Virginia such as iron ore. According to Bob Coltman: "My opinion is that the tune probably is earlier than the Cripple Creek gold strike (1891 in Colorado), but that the words, and thus the song title, could have been put to it afterward, say at the turn of the century." Mike Yates (2002) validates that "most Virginia musicians believe that it relates to a location in Wythe County, Virginia."